It was a time of mourning at the old homestead last night. You see, it was the first night in TWENTY-ONE FREAKING DAYS that we were without a James Bond flick for our viewing pleasure. If you sense sarcasm here, please book a flight immediately for Vegas for you are psychic…fortune and fame are in your future as you’ll beat all odds on that fabled Strip.

Himself ‘upgraded’, and I use this word loosely, our cable offerings several weeks ago much to his delight and that of the cable company’s money people. Now, instead of watching three channels, we watch five. Out of like, oh, about three hundred. Instead of ‘Pass Time’ or ‘Gas Monkey’ which are American shows, I now get to be bored out of my cranium with British car offerings, too. Men! ‘G4’, or as it’s soon to be called, the ‘Esquire’ channel (sounds like a hooker channel), ran TWENTY-ONE FREAKING DAYS of Bond in all his glory ’round the clock until I was nauseous and bloated with Bond gas and bullshit. If I’m ever greeted by a woman named Pussy Galore I will pee myself and fall down in a quivering mass of hysterics…right after I smack the crap out of her.

Never mind the fact that Himself owns every single Bond film ever made on DVD. 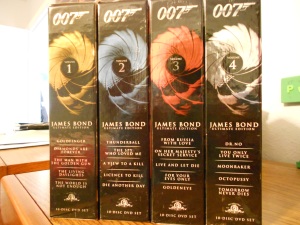 You know what’s even worse? There wasn’t a dang thing on any other channel worth watching! How sad is this?! Where’s the quilting channel, the crochet channel, the ‘let’s watch a car bumper rust ’cause it’s such fun’ channel? Heck, I’d even have settled for a ‘This Old House’ episode with Bob Vila…and I never could stand the guy! This, this is desperation!

And out of TWENTY-ONE FREAKING DAYS of all those gadgets from Q’s crafty mind, raunchy double entendres and sexual escapades, I came to one keen observation.

My mother observed that Bond was the poster boy for venereal disease.  There’s an image I don’t need: Bond with tertiary syphillis.

I observed they should’ve stopped making Bond films when they retired Sean Connery. There, I’ve said it. Cinema’s greatest British spy was most brilliantly portrayed…by a Scot.  And a hot one at that. 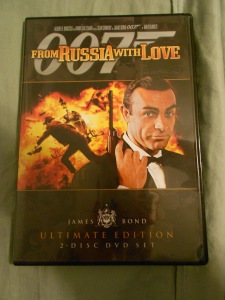 I could see me doing unseemly things for that one.  Is it weird that I find the accent of the Scott’s Turf Builder spokesman appealing?  Yeah, I didn’t think so.

Roger Moore was too cerebral…

George Lazenby’s stint was too short-lived (two films, was it?) and he was kind of a pansy…

Pierce Brosnan was too metrosexual…

Sean, now he had it.  Rough around the edges with just enough  polish to not come off as a total knuckle-dragger.

And I don’t care what anyone says, the man can rock a kilt.