What I’ve Learned So Far From Crochet

I didn’t think it was possible to have a crochet WIP. Add that to the list of stuff I am wrong about.

I’ve been working on this piece for about a week and although I like the colors and design, it’s getting a tad bor—ing.  Those other 5,000 skeins I’ve bought are calling my name.  Must…go…faster! 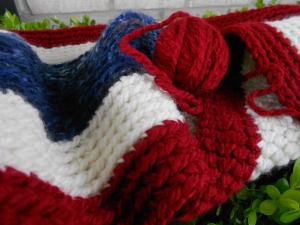 I’ve discovered that crochet is a greedy hobby.  Here I thought three skeins would make me a nice sized afghan.  Stop laughing.  I mean it.  Who knew that a skein of gargantuan size, all neatly packaged in its paper wrap, wouldn’t stitch up big enough to make a dish cloth.  It’s depressing.  And expensive.  How do I always choose the expensive hobbies?  Next time, I’ll choose watching car bumpers rust.

I should really stick to making afghans.  I’ve already tried my hand at making a hat, which didn’t turn out so hot.  Remember this… 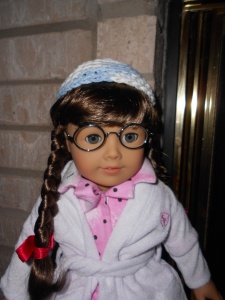 Yeah, that started out as a hat for me.  Himself, the clever devil, said ‘Why not make two and turn it into a bikini top?‘  For who…Shamu?!  I held that baby up to my ample bosom and, channeling Chief Brody of JAWS fame, said ‘I’m gonna need a bigger cup’.  Yes, we’ve both missed our calling as comedians.

Crochet has seriously cut into my quilting obsession.  I’ll gaze occasionally at Lennie, eh, shrug, and back to crochet, that scarlet harlot.

And, saving the best for last, I’ve learned that one can drive and crochet at the same time.  That’s probably not something I should confess, but I do this in the pickup line at school.  It’s a straightaway, my foot’s constantly on the brake.  Honestly Officer, I’ve no idea how I rear-ended that car.  Sue me.  It’s my last breath of peace and serenity before The Co-Defendants hit the backseat.  Plus it beats the hell out of cussing the driver in front of me who’s texting.  Ahem…